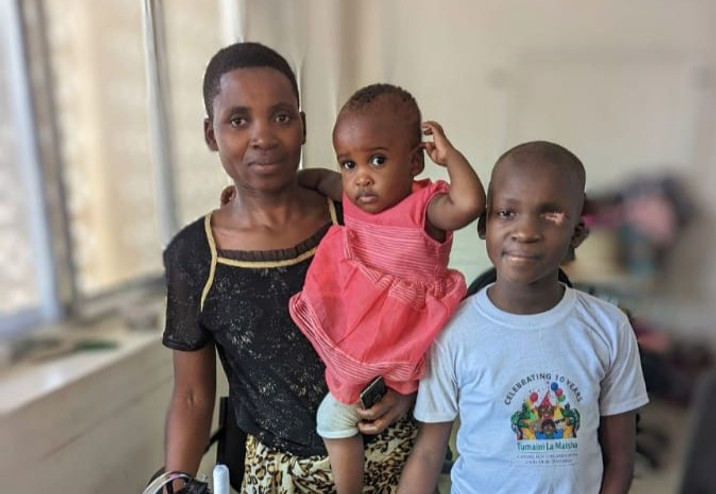 Abistina is a 16-year old super smart teenager with a huge personality from the Southern part of Tanzania. In November 2021 her left eye began to swell so her mother took her to the nearby hospital. Following 8 days of antibiotic treatment her eye was no better. Her mother decided to bring her to the regional hospital 3 hours away for a second opinion. There she was reviewed and the doctors were rightly concerned that Abistina might have signs of cancer. They sent her a further 2 hours away from her home, to the Regional Referral hospital in Mbeya, MZRH. (MZRH is thankfully one of our NCCN* partner centres with access to all available child cancer services). The doctors took a biopsy and sent it to the NCCN hub where a diagnosis of cancer (rhabdomyosarcoma) was confirmed. In February 2022 Abistina and her mother agreed for the local doctors to remove her diseased eye. Following this it was decided that the remainder of her treatment should be undertaken in Dar es Salaam at MNH – 15 hours away by
bus.

Mama Abistina is a sensible woman and had understood and agreed with the treatment so far (including the removal of her child’s precious eye). But Dar es Salaam was a lifetime away; she had no savings to her name; it all sounded utterly impossible and terrifying. She also had a little baby whom she was still breastfeeding. It was too much to manage and she despaired there was no option but to watch her first born die.

Thankfully the local doctors had a different opinion as knew of the TLM supports available and reassured Mama Abistina that everything would be okay. TLM paid for travel costs, chemotherapy, health insurance, hostel and nutrition supplements. MNH cover all the hospital costs. And her baby was welcome to stay with Abistina. It seemed too good to be true to Mama Abistina – but she began to hope again.

And so in February the little family took the long journey to MNH. Abistina needed chemotherapy and radiotherapy for over 6 months. She was incredibly strong and brave and so much of her treatment was possible from the TLM Ujasiri ( ‘Brave’) hostel. There she attended the daily TLM school program and her mother joined the skills class. Mama Abistina had never worked a sewing machine before but
she was determined to master it. She worked tirelessly with Prisca, the TLM skills teacher, and learnt to make more than 20 different items. No parent has ever been more committed to skills training.

Abistina became the Ujasiri spokes-child confidently public speaking on behalf of the community welcoming any visitors. On September 24th this little family of mighty girls was discharged home. Abistina is not only in complete remission but her stay at MNH did not delay her studies and she continues her Standard 6
schooling without missing a moment. She’s hoping to come back to MNH one day to train as a nurse.

And TLM had a special gift for Mama Abistina – for all her
incredible efforts we couldn’t let her leave without providing her
the sewing machine she has mastered and needs to set up her
new business.
It’s always an incredible moment when a child goes home in
remission. It’s a rare and extra-special feeling when, despite the
trauma of the cancer diagnosis, TLM play a small role to make a
lasting positive impact on the entire family.
Together we can!
*NCCN = National Children’s Cancer Network

We use cookies on our website to give you the most relevant experience by remembering your preferences and repeat visits. By clicking “Accept All”, you consent to the use of ALL the cookies. However, you may visit "Cookie Settings" to provide a controlled consent.
Cookie SettingsAccept All
Manage consent

This website uses cookies to improve your experience while you navigate through the website. Out of these, the cookies that are categorized as necessary are stored on your browser as they are essential for the working of basic functionalities of the website. We also use third-party cookies that help us analyze and understand how you use this website. These cookies will be stored in your browser only with your consent. You also have the option to opt-out of these cookies. But opting out of some of these cookies may affect your browsing experience.
Necessary Always Enabled
Necessary cookies are absolutely essential for the website to function properly. These cookies ensure basic functionalities and security features of the website, anonymously.
Functional
Functional cookies help to perform certain functionalities like sharing the content of the website on social media platforms, collect feedbacks, and other third-party features.
Performance
Performance cookies are used to understand and analyze the key performance indexes of the website which helps in delivering a better user experience for the visitors.
Analytics
Analytical cookies are used to understand how visitors interact with the website. These cookies help provide information on metrics the number of visitors, bounce rate, traffic source, etc.
Advertisement
Advertisement cookies are used to provide visitors with relevant ads and marketing campaigns. These cookies track visitors across websites and collect information to provide customized ads.
Others
Other uncategorized cookies are those that are being analyzed and have not been classified into a category as yet.
SAVE & ACCEPT